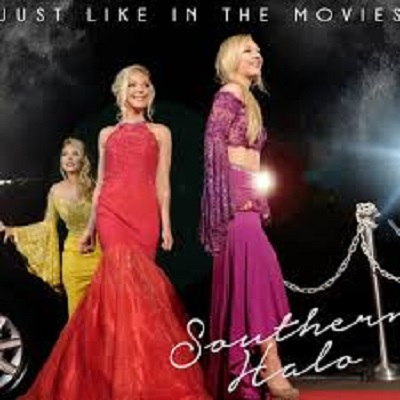 The sister trio who I wrote about in 2016, Southern Halo [Southern Halo Music] , is back with their sophomore effort, “Just Like In The Movies”.   Sibling in-unison harmonies fall into the southern rock, indie and country pop categories, .

Flying high on stages and in-studio, the trio consists of Natalia {“Nata”) on guitar/lead vocals, Hannah on bass and  “Tinka” who really bangs-out the beat on those drums –She is hard workin‘! (Reminds me of  the late John “Jabo” Starks of the James Brown’s band! lol)

All of the lyrics are interesting, true-to-life and written against the prism of them having grown up in Mississippi, while listening to blues, rock and country stylings, which has translated into an initial regional appeal-gone-slightly international.  This is especially accurate on “Anything Is Possible”, which was the first single released.

For best songs, “Tom Girl” is recommended because of its movin’ tempo; if only it had a fade ending like the only cut which does, “Notice Me”, also a standout. Cold endings mostly leave me…”cold”.

Eldest lead sister, Natalia Morris says of the recording, “the most important thing is that it’s a concept album. All of these songs are like pieces of a puzzle that all fit together”. That concept is their fantasy world, born of a dream that they have a successful and long musical career, which may happen, “Just Like In The Movies” has fourteen songs and there is even a title song to go with their “Southern Halo” theme on track one.

I prefer to listen to a couple of these tunes out of the total context for best enjoyment – otherwise it became a bit trite.

Personally, their sound is not my cup of tea but I appreciate their family-affair effort, which isn’t always easy in life.  Their sound doesn’t groove with my multi-format disc jockey mind – and I dig a lot of country and blues music – it may be that it is too lovely, and I like “bad” girls. Or maybe this is more the “musical” genre of stage.   Regardless, their “movie” is “G”-rated and I prefer at least a “PG’ or an “R”.  My inner “Siskel and Ebert” likes more drama in its cinema and rates the “movie” with two-and-a-half stars.

Having said that, they will likely be the next number one sensation, lol

[Check out my Mothership blog for book reviews and other commentary/random bachelor diary notes and more at https://achilliad.wordpress.com/  ]

An ole Skool contemporary music critic, with a mind like a digital jukebox with 45s playing. View all posts by achilliadsmyvinylrecordshoppe

This site uses Akismet to reduce spam. Learn how your comment data is processed.