“At the end of the musical day, if I was still a DJ on the radio, this music would be deemed “MOR” (middle of the road) back in the 1970s. Now, I hear it is described as “Americana”? Well…” 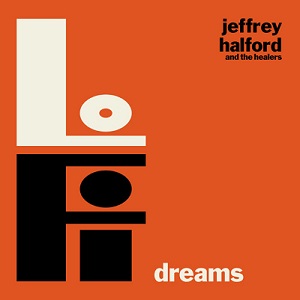 CHARLESTON July 29, 2017 – I have been having a party recently in my car, listening to “Lo-Fi Dreams” performed by Jeffrey Halford and The Healers [Floating Records] on its CD player.

What is this “Lo-Fi” Dream?

Hi-Fi (High Fidelity) was the 1960 predecessor to Stereo and after that came Quadraphonic audio, so does it follow that “Lo-Fi” might be back to the future after Digital?  If so,then what a groovy journey!

What I like first is that every one of the ten tunes are different. 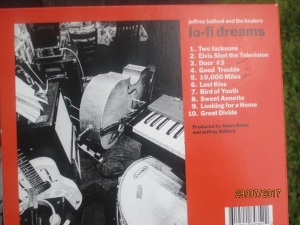 Track one is “Two Jacksons” and I challenge you to guess what it is about before you listen or I tell you below (don’t peek!). It is a great, very descriptive lead-off song which helps you imagine letting your mind wander while watching this healing live.  No mention of the background singers much to my lament. 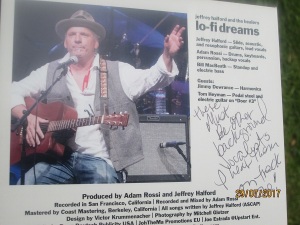 Track two leaves no doubt as to the subject matter. “Elvis Shot the Television” starts with a Jimi Hendrix playing the Star-Spangled Banner-like guitar riff and then goes on to remind of us a legendary Presley incident.   “Good Trouble” is just that and who of us hasn’t had some of it at one time or another?!   I like “10,000 Miles”, as a good behind-the-wheel tune.  Speaking of relationships one way or another throughout, “Bird of Youth” is a song of irreconcilable differences, again, like we all have experienced at one time or another. This is the music of our lifetime.

Track eight has a smooth country pace and could have been named “Refuse” or the “Diner”. Instead they went with the tale told of “Sweet Annette” which features a succulent solo guitar in the middle of this offering whose lyrics make me want to have breakfast any time of the day!  “Great Divide” is geographically separating love music!

At the end of the musical day, this music would be played on “MOR” (middle of the road) format radio back in the 1970s. Now it is described as “Americana” I guess.  I do not care much about labels, except that my research took me to the definition described by ‘The Atlantic’ as, “slang for the comforting, middle-class ephemera at your average antique store — things like needle-pointed pillows, Civil War daguerreotypes, and engraved silverware sets. In the 1990s, radio programmers coined a new, related usage: “Americana” became a nickname for the weather-beaten, rural-sounding music that bands like Whiskeytown and Uncle Tupelo were making. It was warm, twangy stuff, full of finger-plucked guitars and gnarled voices like tires on a dirt road.”  Many lyrics feature uniquely different musical takes on love and unhappiness while others celebrate connections and odd circumstances we All have experienced.

Well, not wanting to undo the diversity of this music review but, my elderly mum has similar “engraved silverware” sets to this very day, so what does this say about her “Lo-Fi Dreams”?

Whether Jeffery knows it or not, he has evolved into an entertaining diversity of sound – much like High Fidelity audio was back before “the day”.

Oh, by the way, “Two Jacksons” is about an article of men’s clothing that cost forty dollars and a flirtation situation. “You wear that jacket and I’m yours tonight! Torn and frayed, in need of repair/she was standing right there…” It should become a single hit.  I love the classic hit musik bar X formula bridge solo. 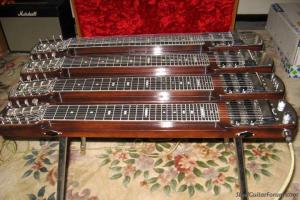 Four of five steel guitars is my rating.

Comments please?  Many Thanks. 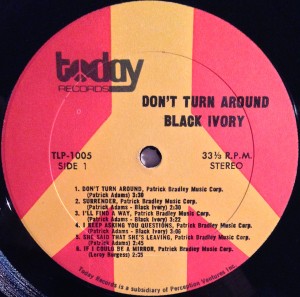 1972 – Any University, metro New York; dormitory:
The Soul music singing group, Black Ivory, better known for the classic, “You And I” and “Don’t Turn Around” is heard in the hallways regularly.  However, this is a personal Kratesfullojointzmusik mission I write about tonight. Hauntingly, I share it with thee as it teases me, for your obvious non-judgmental amusement.

The best lyric of all, in my opinion and dominion is the one this post is following. Maybe because I am an elf or maybe due to my status or fungus, but it is, “Now, I’m the loneliest man in town”. None-no-fun, as we used to say back in the day.

I am often that and morosely in-perpetuity. So, what? Need a hot fox to keep me company. One with the bosom of classic actress, Ann Margaret; maybe a red head, like I saw in the supermarket yesterday. Butt (lack of ass) who knows?
They say a supermarket is the best place to meet a chick! Nyet. Please bring your discount card! Didn’t work; couldn’t think up something to say to her. Now (again) “I’m the loneliest man in town”.
And so it comes to me that I am again making new friends and acquaintances in a distant city and where the crutch is the bible belt and the women are not as forthcoming sexually.

Fast-forwardly I, the Master, came to the Carolinas to rid myself of the cold and to be near the ocean, initially. Yet it is not the main reason, because retirement looms.

I am only lonely because [use your imagination or fill in the blank] And If it didn’t, I would fly, marry her according to their rules and bring her back to the USA, so that I would finally have the companion I need to walk up to the sun together with now. Damn…