“I’d never heard of her previously, apparently these songs were originally released three decades ago!  Wow, they are still fresh and relevant.  From the first orchestral notes of the album, “Drifter” paints a story…” 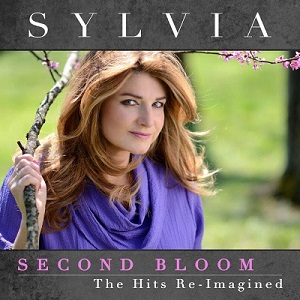 June 8, 2018 saw the reincarnation and rejuvenation of ten tunes by Country/Pop and Adult Contemporary singer, Sylvia, entitled “Second Bloom – The Hits Re-Imagined” [Red Pony Records RPR-1104].  Since that date, she’s been holding court at Country music conventions and hosting radio shows! All grown up now since her early 1980s debuts of these tunes, Sylvia (Hutton) croons often about romantic heartbreak.

I’d never heard of her previously, apparently these songs were originally released three decades ago!  Wow, they are still fresh and relevant.  From the first orchestral notes of the album, “Drifter” paints a story that could be a cowboy plains rider or old USA western-style movie – Pause! “Country & Western” is what people used to call this music!

The proof is on track three, when she tells her friend, “Tumbleweed”, “you live in a cowboy’s dream…”. Initially sounding like a yodel, that track grew on me!

Slightly sad but not depressing, Sylvia sings about the quirks in romantic relationships from a woman’s perspective; often unrequited with cheatin’ involved like on “Nobody”, a cute play on the word, and often-used tactic by the writers.  I can hear why these were hits – and they still are!

Sylvia’s selections are delivered in typical blunt Country music style,but without the raw edges and always with a lesson. You get ten songs, 70% of which are instant tune wedgies and 60% penned by the duo of Fleming and Morgan. 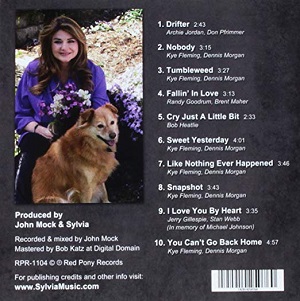 I dig the fiddle and arrangement on “Fallin’ In Love”!  I like how she handles the boyfriend assuming the posture of “oh she’s just a friend” on “Like Nothing Ever Happened”and the catchy little ditty, “Snapshot”, track eight, which is a different kind of “hold it, say cheese…” as in “caught ya cheatin’!” This version is more mature-sounding that the 1983 original, which had a bubblegum feel to it.  Its “you’re busted, Dude” story-line and playful melody will entrance you instantly! No wonder that the song originally rose to #5 with a bullet from her third album.

“Sweet yesterday” is almost acapella at times and showcases her perfect pitch.  Later, you get a wee taste of easy Caribbean island flavor on “I love You By Heart”.

Professional, crisp and clearly enunciated polished singing, Sylvia is a natural with excellent phrasing like on “Cry Just A Little” which begins with a nice acoustic guitar intro of a few licks. How can we not love this music?

Finally, there once was only one “Sylvia” in my musical life, the late Ms. Robinson, head of Englewood, New Jersey’s R&B label, All Platinum (“Pillowtalk”).  Now, I am happy to add another. Therefore, unequivocally I give this four-out-of-five western boots to “Second Bloom” and you should add it to your collection.

Check out her website!  www.SylviaMusic.com  and as always, check in with my mothership www.achilliad.wordpress.com    Thank you and please leave comments.